Congratulations to the mock trial teams who competed across the country earlier this year! In November 2018, a team consisting of Kelsy Fraser, Canon Thomas, Sabrina Meng and Sean Kurdoglu had a successful deep run in the invitational Buffalo Niagara criminal law mock trial competition, advancing twice to the elite eight. Sean Kurdoglu put in a particularly impressive performance and won the “Best Overall” Award (out of the 128 competitors!)

Luis Bustamante, Sabrina Meng and Jamila Ha advanced to the finals, and came within one victory of advancing to the National competition in Texas in April.

Kelsy Fraser, Canon Thomas, and Sean Kurdoglu also performed well, and came within one judge’s ballot of advancing to the elite eight.

These students spent six months building up their trial skills in preparation for these competitions. They worked on numerous weekends, sometimes spending up to 7 hours at a time in practices. They were coached by Professor Robert Molko and Adjunct Professor Mark Brown. Congratulations to all! 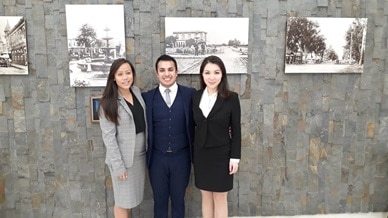