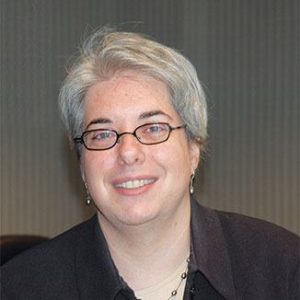 Professor Sobel was Executive Director of Equality Advocates when that organization advanced noteworthy state and national legislative successes; she is an award winning teacher who has written and lectured on legal issues related to sexual orientation and gender identity.

Professor Sobel was a Visiting Professor at the University of California, Irvine School of Law in 2019. Before coming to WSCL, she was a lecturer of law at the University of Pennsylvania Law School where she taught lawyering in the Public Interest and Sexual Orientation, Gender Identity and the Law. Professor Sobel taught at Penn Law for five years and received its Adjunct Teaching Award in 2007. She was also a lecturer at Rutgers University School of Law – Camden in 2009 and an assistant professorial lecturer at law at the George Washington University Law School from 1992 to 1996.

Professor Sobel served as Equality Advocates Pennsylvania’s (formerly the Center for Lesbian and Gay Civil Rights) executive director from 2001 to 2008. While at Equality Advocates, she was part of the leadership teams that defeated legislation attempting to prohibit relationship recognition for non-married couples in the Pennsylvania Constitution in 2006 and 2008, and amended the state’s hate crimes law to include lesbian, gay, bisexual, transgender, and queer (LGBTQ) people, among other groups in 2002. She drafted the hate crimes legislation’s text, which was one of the most comprehensive in the country and the first Pennsylvania law to recognize the LGBTQ community. Under her leadership, Equality Advocates successfully advocated before the Pennsylvania Supreme Court as co-council for the amici curiae for second parent adoption and custody rights for LGBTQ parents, and as co-council with the City of Philadelphia to uphold its domestic partnership benefits. Prior to joining Equality Advocates, she was the legal director of the Servicemembers Legal Defense Network (SLDN), where she assisted military members who were harmed by “Don’t Ask, Don’t Tell” and monitored its implementation.

Professor Sobel has provided legal and government affairs services for clients including the National Gay and Lesbian Task Force and the Women’s Law Project among others. Her pro bono work includes serving on the Clinton/Gore transition team and the White House Office of Presidential Personnel in 1992 and 1993. Before she attended law school, she worked for the New York State Assembly House Operations Committee and the New York State Governor’s Office of Employee Relations.